So stay relaxed as we will give you a complete pre match analysis of Telugu Warriors vs Kerala Strikers CCL 6 2nd match. 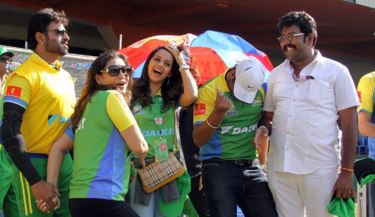 Colors TV is the official broadcaster of CCL 6 along with few others television channel of Sun network. Gemini TV and Surya TV are also 2 channels which run under the supervision of Sun Network. These two channels are the Telugu Warriors vs Kerala Strikers match live telecast channel.

Akhil Akkineni is the captain of Telugu Warriors. Telugu super star Venkatesh is also included in the team squad. Among other players Sachin Joshi, Tarun, Susanth and Srikanth are the familiar names among the viewers.

One of India’s all-time great actor Mohan Lal is the captain of Kerala Strikers. The prolific movie star will be supported by Indrajith, Rajeeb Pillai, NivinPauly and Vinu Mohan who are also well familiar in Kerala film industry.

Telugu Warriors vs Kerala Strikers live score, match preview and updates of 2nd match of CCL 6 will be available in our site. So stay with us to enjoy all sort of entertainment of CCL