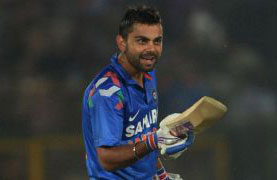 Both the teams India and West Indies, eyeing their second World Cup title. India did well to bounce back from defeat first match of their T20 world cup journey against New Zealand and won its remaining three games with Pakistan, Australia and Bangladesh. On the other hand, West Indies after defeating strong opponents- South Africa, England and Sri Lanka lost with Afghanistan in their last Super 10 round match.

Live score updates of India vs West Indies is set to begin at 07:30 (Local time). In today’s semi-final game key players for the team will see two of the most feared batsmen in the T20 game come up against each other in Gayle and the master of run-chases Virat Kohli. Gayle is a top order batsman and massive player for the West Indies and they will want to make sure he is fit for the game after missing the last game with an injury. India’s superstar Virat Kholi as he is one of the big reasons the team is in the semi-final. Kohli’s hitting two half-centuries in this tournament against Pakistan and Australia in games that mattered the most to the team. Kohli’s averages 53.55 in T20’s which is astonishing and he will be hoping to have his say in a big way in the semi-final.

Yuvraj Singh who injured himself during India’s six-wicket win over Australia has been ruled out. Expect Ajinkya Rahane to slot into the side in Yuvraj’s absence. The men from the Caribbean may be the underdogs, but they are capable of beating any team on their day.