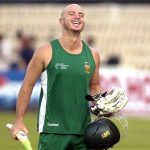 Herschelle Gibbs played in 2013 last in Caribbean Premier league. He also played in Masters Champion league in last February. He is in Grade A category. Misbah â€“Ul-Haque, Ahmed Shehzad, Grant Elliott, Jason Holder, Ryan ten Doeschate, Mohammad Hafiz and Seekkuge Prasanna are also in the apex grade. The name list of 168 players whose name is listed in players draft of BPL has declared in last Monday night by BCB. The highest 42 number players are from Pakistan. There are also 36 and 35 players from England and West Indies respectively. The players draft is supposed to be held on next Friday . Beside players draft, 31 foreign cricketers are confirmed to play.

The remuneration of players according to grade is as follows

Two Pakistani cricketers who have recently overcome their prohibition for spot-fixing Salman Batt and Mohammad Asif are also in the list of players draft. After justifying the bowling action Sayed Azmol is in C grade. Another mystery spinner Ajantha Mendez is in D grade .