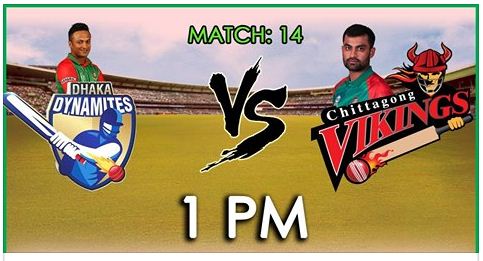 It is the match number 14 of BPL 2016. The match between Dhaka and Chittagong has been scheduled to be started from 1pm local time on November 17 (today). It is to be noted that the governing committee have changed the time schedule of BPL and the first match of the day will be started from 1 pm BDT instead of 2pm which was declared earlier. This will be the first match in Chittagong. The venue is Zahur Ahmed Chowdhury Stadium.

How to Watch Dhaka Dynamites vs Chittagong Vikings match?

Dhaka have won 3 out of 4 matches they have played so far. All together the team gained 6 points and stand at the top of BPL 4 points table.

The Vikings just won 1 out of 4 matches and gain 2 points. The franchise stands at the sixth place of BPL 4 points table.

Chittagong Vikings: Captain Tamim Iqbal along with Mohammad Nabi, Abdur Razzak, Shoaib Malik and Taskin Ahmed will be the vital players for the Vikings.

To get Dhaka Dynamites vs Chittagong Vikings live score and other updates, please stay in our site.