Dhaka Dynamites Players List , Logo, Owner BPL 2019. Bangladesh Premier League (BPL) 2019 is going to be started from the last week of November this year. BPL 2019 will be the fourth arrangement of this T20 championship after the one years prolonged gap. All together seven franchises are participating in the game including the defending champion Dhaka Dynamites (previously known as Dhaka Gladiators). 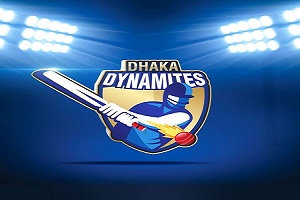 Dhaka Dynamites, being the second team to officially unveil the logo for BPL 2019. Their official logo will demonstrates a batsman hitting a bowl which eventually represent the thunder-storming nature of T20 cricket. The franchise, unveil their logo in their official Facebook page. More updates related to Dhaka Dynamites will also be found there. Earlier, Barishal Bulls were the first team to introduce the logo to all.

Bangladesh Export Import Company (BEXIMCO) has brought the ownership of Dhaka Dynamites franchise. BEXIMCO being one of the largest and most diversified company will participate in BPL 2019 with a view to sealing the trophy of BPL 2019.

Mashrafe Bin Mortaza, captain of Bangladesh ODI and T2O team was the leader for Dhaka Gladiators in the first two seasons. Hopefully, he will remain as the captain of the team. The final squad will be finalized very soon after the auction takes place. The auction date was 31 October but it can be happened earlier.  There is rumor that Jackob Oram, New Zealand former all-rounder can be act as the mentor of Dhaka Dynamite. The voice of Bangladesh, Athar Ali Khan becomes the team manager of Dhaka Dynamites.