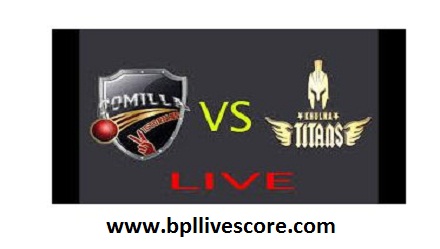 Comilla Victorians vs Khulna Titans match details have been added in the later part of the news to give you an overall idea about the match.  BPL T20 Match Schedule and Full Fixtures 2017.

Comilla Victorians have brought some significant changes in this season. Appointing Tamim Iqbal as the Icon and Captain of the team is one of them. The team has managed to sign talented foreign players like- Marlon Samuels, Fakhar Zaman, Darren Bravo, Angelo Mathhews, Shoaib Malik, Rashid Khan and Joss Buttler. The team has few skilled Bangladeshi players as well like- Al-Amin Hossain, Imrul Kayes, Alok Kapali and Mohammad Saifuddin.

The Titans will once again keep faith on Mahmudullah Riyad as he is the captain and icon player of the team. Among the local players- Nazmul Hossain Shanto, Saif Hassan, Abu Jayed, Shafiul Islam and Dhiman Ghosh are the notable names. The team also has good overseas players including Chadwick Walton, Chris Lynn, Kyle Abott, Rilee Rossouw, Charlos Braithwaite and Sharfaraz Ahmed

Even though Khulna Titans has formed a better side, still Khulna Titans vs Comilla Victorians match prediction will depict equal chances for both the team considering the overall situation and presence of Mahmudullah Riyad, the player of the tournament of BPL 5, in Titans’ side.

Comilla Victorians vs Khulna Titans Live telecast will be available on our site while Gazi TV and Maasranga will provide live telecast. Rabbithole app will provide the live streaming service of the match. Get all the updates of BPL matches here in our site. Stay connected with us.