As Hogg will no longer be available for the 2017 season, TKR had a tough task of acquiring an able young replacement in their hand, and they have invested money on Miraz, who is known mainly for his off-spin. 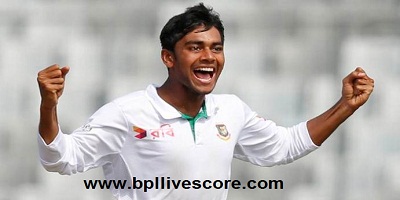 However, Miraz has recently shown himself to be more than capable with bat in hand in striking his maiden ODI fifty against Sri Lanka on April 1.

In TKR, Miraz will play alongside the likes of his old BPL teammate Kevon Cooper as well as Brendon McCullum, Hashim Amla and rising Pakistan star Shadab Khan.

Hearing the news Miraj said, “off course it’s a good news for me, I’m so happy that I am going to be a part of CPL although Shakib vai playing there and now I have to play”.

He will play his home games in the CPL at the historic Queen’s Park Oval in Trinidad, home of legendary West Indies batsman Brian Lara, and enjoy the support of the vociferous Triniposse.

Shah Rukh Khan is the owner of Trinbago Knight Riders

Mehedi Hasan Miraz took 19 wickets during his debut series against England in 2016, and helped his side defeat the tourists for the first time in Tests at Dhaka with six wickets in each innings. The last series of Bangladesh, he played a good cricket. Which team to played Mehedi Hasan Miraz in CPL T20 2017.

In this year of edition of CPL will start from 1st August and final will 16th of September, 2017.