Both the teams are well set and among the strongest teams in CCL history. Kerala Strikers vs Chennai Rhinos Live streaming will be available in Sun network. More news including 3rd Match of CCL 6 2016 has been updated in the later part of the news. 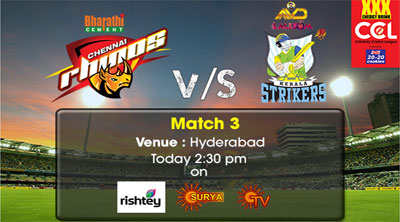 According to the scheduled of CCL website, Kerala Strikers vs Chennai Rhinos match will be telecast live on Surya tv and Sun TV. Both the tv channels are the part of broadcasting firm Sun network. In addition to that Colors tv, PTC Punjabi are also exist in the list of CCL 6 live telecast tv channel.

Kerala Striker’s will be lead by Mohan Lal, the super star Indian actor. The team has Riyaj Khan, Prajodh Kalabvan, Suresh Nair, Vinu Mohan, Manikuttan and Manty in the team squad. The team is more all less balanced.

Chennai Rhinos on the other hand, will be headed by Jiva. They have players like Vishnu, Vikrant, Ashok, Sanjay, Uday and Sham who are well known for good playing. Chennai Rhinos won the CCL trophy for two times.

Kerala Strikers vs Chennai Rhinos Prediction will be in favor of Chennai Rhinos. This team is the favorite in the 3rd match of CCL. Chennai Rhinos is one of the most successful teams in CCL history as they won the first 2 season of CCL. The team has few very good batsman and scary bowlers who can be the match winner in this match. Kerala Strikers never won any trophy in CCL history. The team reaches the semi final of CCL in 2013 and so far this is their best performance. Even though they are the underdogs, still they will fight hard to start the new season with a flying start.