Live Score Update of Dhaka Dynamites vs Barisal Bulls match. To find DD vs BB live score update and BB vs DD match result, please visit our site. You will get all relevant news of Bangladesh Premier League 2016 here — https://www.bpllivescore.com 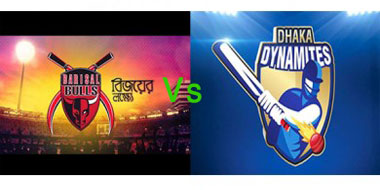 Brief Preview and Prediction of Barisal Bulls vs Dhaka Dynamites

Mahmudullah Riad, is a player to watch and have been in good touch so far in BPL 4. Besides, the team has Sabbir Rahman in batting who however, has not yet shown his excellence so far. In bowling department Keevan Cooper has done extremely super so far in BPL 2016. The team also has players like Mohammad Sami, Al Amin and Taijul Islam who definitely bowl well.

In batting Dynamites, Dhaka Dynamites has experienced Kumar Sangakkara who had scored a match wining 75 runs in just 56 bowls against Sylhet Super Stars. Bangladeshi icon cricketer Nasir Hossain and Sri Lankan Lahiru Thirimanne will also increase the batting strength of the team in the match. In bowler, cutter master Mustafizur Rahman and Pakistani leg spinner Yasir Shah will be the key bowler for Dhaka Dynamites that’s for sure.

To conclude, In Dhaka Dynamites vs Barisal Bulls match, both teams have an equal chance to win the match and seal the top position in BPL Point table 2016.