Bangladesh Premier League 2016 theme song. BPL 2016 Theme Song For All Team. BPL is knocking at the door. All the teams are getting the last time preparation. Already the inspirational songs are ready for the players and audiences. Every team is trying to make some songs regarding the cultural and achievement of that locality. The famous singers are lisping those songs. Band singers are not out of it.

There is no inauguration ceremony this time. So there is no theme song actually. Last time theme song will use this year also. There will be some cultural ceremony with the domestic singers in the break time of  the tournament. The theme song of the last BPL is written by  Ishtiaq Ahmed. 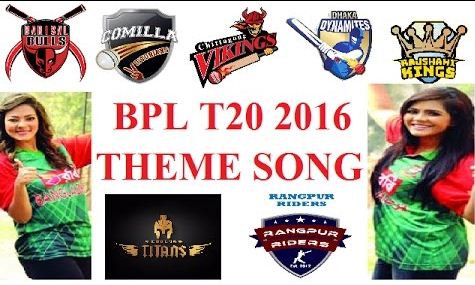 7 teams are playing in this BPL. The management of Dhaka Dynamites informs that their song is composing by the  band CHIRKUT. From tomorrow their song will be aired in different media. The legendary singer Mamtaz is going to sing the theme song of Rajshahi Kings team. Band Nemesis will  also sing this theme song.

A song written by Kabir Bakul  is used as theme song of Chittagong Vikings . The song is singing by famous singer Kumar Biswajit. Besides Kumar Biswajit, there are also 3 other chottagonian singers Nakib Khan, Nasim Ali khan and Partho Borua.  A song , directed by Fuad and sung by Mila and Tapos is the song of Comilla Victorians and it is their last year’s song too.

Hidoy khan is the vocal for the theme song of Rangpur Riders. Kabir Bakul has written this song . Hidoy informed that from 2nd November, this song will be on air and online . He also added the song is very inspirational. Not only the audience of Rangpur Riders, but also the other people hopefully like this song. ”

The fourth BPL will start on 4th November and the franchises have already  finished the selection of their teams . Now this time, 5 foreign cricketers have joined in the last BPL’s champion Comilla Victorians. It is also in the air that more 3 cricketers from abroad will join in this team soon. This news comes from the press release of Comilla Victorians  team.

On behalf of Comilla Victorians,  the man of the tournament of the last BPL, Pakistani cricketer Azhar Jayedy is coming. In addition, Imad Wasim, Ahmed Shehzad, Sohel Tanvir and Rashid khan are also coming from Pakistan. On the other side young leg spinner from Afghanistan, Rashid khan is practicing with the team in BKSP.

The man of the tournament of last BPL, Azhar jayedy said,” It is my pleasure to play on behalf of Comilla Victorians again. Last year experience was awesome. This year I am also aiming for the victory of the team. The victory of the team is more important than the personal success. This year , it’s an excellent team. There is no alternative to continuing the championship without such a good team”.