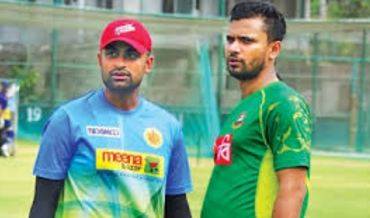 There is every day a get together of cricketers in Mirpur Academy playground. Continuously there are regular practices of the club teams one after another. After practicing, the players of Kalabagn has sat together for discussion and the speaker was Mr. Mashrafe ,the inspiring captain was speaking something about to motivate the team.

Kalabagan is a mediocre team, but they feel strong enough because they have the icon Mashrafe.  Mashrafe carries the team spirit always and this spirit overcomes many weaknesses of the team. It is only two days he is in the practice of the team and the lesson of team spirit is started already.

Mashrafe himself is very inspiring and extra motivation he has got from DPL’s players Draft. It is supposed to be a competition for getting Mashrafe in the team but the scenario was adverse.  Among 12 teams who are privileged to choose  an icon and A grade players , first, 10 teams on the list did not show any interest to include Mashrafe in their team. At last, Kalabagan has selected him.

It is not a matter of usefulness for Mashrafe in such a position of lofty career. He was with his family in India during players draft. The ignorance from 10 top rated teams  upset  him so much but he conquered this disappointment  quickly and turned it into his strength.

He said confidently,” this all disappointing matters always encourage  me a lot. At the 1st BPL, I was unsold. Lastly, Dhaka Gladiators took me. Last year the same thing happened in Dhaka league. When nobody chose me and at the last  moment, Mohamedan selected me.  By the grace of Allah, I played  well everywhere. When Mohamedan   was doing terrible , consecutively in four matches, we did very well and won . For that, we got the chance to play in super league.”

Lastly, the team who has taken him, Mashrafe has the high responsibility for them. There is also pressure like being a big icon of Bangladesh ,playing in a mediocre team. But, he has taken it joyfully and challenging.

He added excitedly, ” I am excited to play in Kalabagan team. Before once I played for City club but due to injury, after two matches  I had to back . Once I played in Indira road as a practice match. Besides these, I always play with the conventional big teams like Abahoni, Mohamedan , and Biman. This time, I am playing with Kalabagn and I am thrilled to play in this team”.

He feels that doing good with a medium range team is different. But he would not like to express the measurement of doing good  in public now.

He commented on Klabagan,” Maybe nobody feels so confident with this team to attain victory. But I have the inner feeling for that. I  am not talking about to be a champion. Many do not like to play in this team. But I feel that we can do better unitedly.” Masrafe puts more importance on team integration.

Masrafe is also happy as the new team welcomes him too much. He feels that everybody is too good. He recognizes that after a long career of 16 years in cricket, he does not want money. He desires respect what he attains from  Kalabagan as like as  from  Abahoni or Mohamedan.

But he does not blend his own future with the challenge in this club. He inspired other young players in the team to be ambitious . He always teaches others how to make a dream. In BPL, Dhaka leagues many bodies can play. But he makes other young cricketers be determined to play superior to get a chance in the national team.

He said, ” there are may 20-22 years old players like Sadman, the 22 years left-handed opener.They can play more 12-14 years. So, they should take preparation to play in national team. I would like to see them prepared for the national team , as it is required and desired.

Now, this is Mashrafe. He knows very well the club captain ship. And in the club, though his national identity  suppressed all other things. Moreover, he is not a captain only . He is a guardian of the team. Let see Brothers vs Mohammedan Score DPL Today Match Result 2016.