Dhaka Stars Player List, Team Squad BPL T20 2022. Minister Group Dhaka Team Squad in BPL 2022. Bangladesh Premier League, the country’s biggest T20 tournament, is going to be started once again from the very first month of 2022. Today, we will discuss a particular franchise of the upcoming Bangladesh Premier League where our main focus will be on the franchise representing Dhaka, the capital of Bangladesh. More details on this topic will be found in the later part of the news, please continue reading. 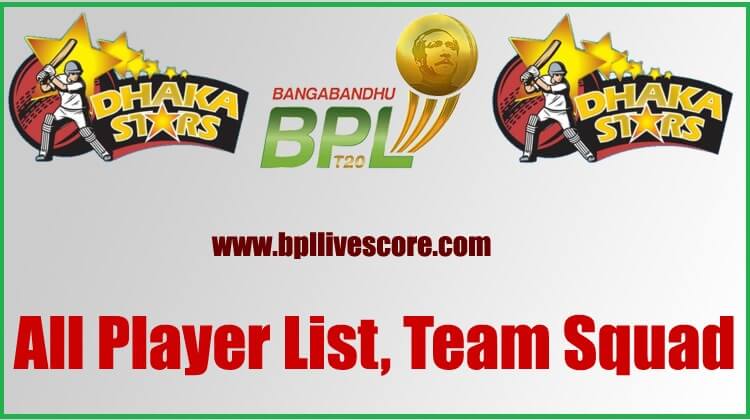 Minister Group Dhaka playing xi today match update. The exciting tournament will bring thousands of the audience under the roof and it can be said without a doubt that cricket lovers all over Bangladesh are eagerly waiting for the beginning of BPL, the most ecstatic T20 tournament in the country. Dhaka is so far the best when it comes to claiming the title of Bangladesh Premier League. This time the franchise representing Dhaka will be known as the Dhaka Stars.

The player’s draft of Minister Group Dhaka will be held soon. To be more specific the player’s draft of Dhaka Stars will be held on December 27, 2021. Earlier, the Dhaka Stars player list contained players like Shakib Al Hasan, Nurul Hasan Shohan, Andre Russel, Mohammad Naim, Hazratullah Zazai, Rubel Hossain, and many others. But this time according to the news from several sources Shakib Al Hasan will play for the Fortune Barishal franchise and so far, it has been confirmed that Soumya Sarkar will represent Dhaka Stars as a direct signing of the franchise. Soumya Sarkar is by far the first signing of the franchise and it has been confirmed through several sources.

However, it has yet not been confirmed whether Soumya Sarkar will also be the Icon Player of Dhaka Stars. Bangladeshi cricketer Khaled Mahmud Sujan was in charge of the team as the Head coach of the Dhaka Stars, previously known as the Dhaka Dynamites. Things might not remain the same this year as Khaled Mahmud will be the coach of the Barishal franchise as per the news from sources.

In our next content, we will be discussing some other franchises taking part in BPL 8. To get all the updates on BPL 2022, please continue reading our article and visit us on regular basis.