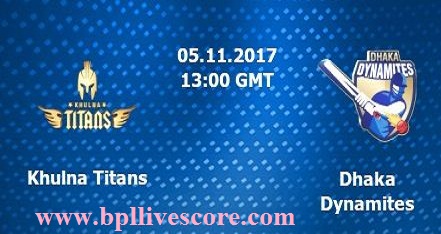 This will be the second match of the Dynamites while the Titans will come to the ground for the first time. All the details of Dhaka Dynamites vs Khulna Titans have been added in the later part of the news. Please go through to know more.

Dhaka Dynamites vs Khulna Titans match has been schedule to take place on November 5, 2017. The match will be started from 7 pm local time. It will be a night match and the second match of BPL 5 Day 2. The match will be held in the Sylhet International Cricket Stadium.

Dhaka Dynamites are currently on the back foot as the defending champions lost their first match in BPL 2017 against Sylhet Royals. Still the team is competent enough to bounce back as they have players like Shakib Al Hasan, Kumar Sangakkara, Evin Lewis, Mehedi Maruf, Mosaddek Hossain, Kieron Pollard and Sunil Narine.

The Titans on the other hand also formed a strong line up keeping best player of BPL 2016 Mahmudullah Riyad in their side along with talented players like Chris Lynn, Rilee Rossouw, Kyle Abbott, Shafiul Islam, Charlos Braithwaite and few others.

All in all, the game is evenly balanced and Dhaka Dynamites vs Khulna Titans match prediction will state equal chances for all.

Thanks for your stay on our site. Please visit us on regular basis.